Home » Studios » The rest of the UK-today » Northern Ireland

UTV  – the independent TV company serving Northern Ireland – has a studio centre in Belfast but no large production studios.  It does have a 1,600 sq ft (149 sq m) studio that in 2010 was given an infinity cyc that can be used for green screen recordings (or blue or white if required.)  UTV’s main studio (studio 1) is used for their daily  UTV Live  programme.

Northern Ireland Screen have been renting Titanic Studios (formerly the Paint Hall studio) from Harland and Wolff shipyard since 2007 for use as sound stages.  The building consists of four 16,000 sq ft ‘cells’ within a huge structure, each with enormous doors to the outside world and connected by internal ‘streets’.  The roof height is an impressive 90 ft and each stage contains a lighting truss grid that can be raised or lowered.  All 8 seasons of Game of Thrones were made here for HBO and Sky Atlantic from 2010 – 2018.  Feature films have included City of Ember in 2007 and Your Highness in 2009.

In 2012 two new 20,000 sq ft purpose-built stages were completed here alongside the Paint Hall.  They are within one long building and were used from the third season of Game of Thrones along with the original Paint Hall stages.  They are named the Macquitty and Hurst Stages.  They can be opened up to form one large space of 42,000 sq ft.

Early in 2014 a planning application was lodged to expand the studios even further.  £14m was reportedly set aside to build two more stages plus associated workshops and other facilities totalling 100,000 sq ft.  The new facility was to have solar panels on its roof, reducing electricity costs.  Planning permission was granted in August 2014 but for some reason these stages appear not to have been built.  Can you help with any more info?

These studios appear to have been pretty quiet following Game of Thrones but late in 2020 it was announced that they would be the base for a feature adaptation of role-playing game Dungeons and Dragons.  Paramount is producing the film, which stars Chris Pine, Michelle Rodriguez, Regé-Jean Page and Hugh Grant.  Filming began in April 2021 and was completed in August. 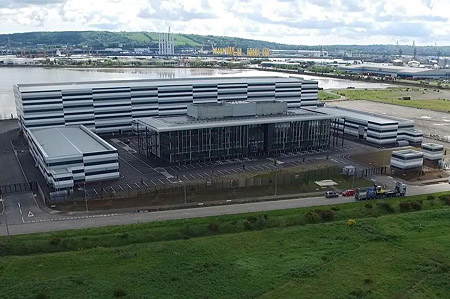 These are the newest purpose-built studios in Northern Ireland – constructed on a former landfill site.  There are two very well equipped sound stages, each of 32,000 sq ft, linked by a 20 tonne acoustically sealed sliding door.  There are also two workshops of 11,000 sq ft each and 36,000 sq ft of production offices.

In June 2017 it was reported that the first booking would be Krypton – a TV series for the Syfy channel set on Superman’s home planet.  A second series began shooting in October 2018.  In February 2020 it was announced that Viking revenge saga The Northman was to be filmed here.  It has a stellar cast including Nicole Kidman and Willem Dafoe.  The following project was announced in December 2020 – The School For Good and Evil, a film for Netflix.  In March 2022 US actor and comedian Kevin Hart began filming heist movie Lift for Netflix.

In February 2020 came the announcement that the studios would be undergoing major expansion.  Four new stages of 21,000 sq ft each plus two of 16,000 sq ft are being constructed, quadrupling the number of stages here.  There will also be 100,000 sq ft of production offices and 130,000 sq ft of workshops.  This is a seriously impressive investment costing £45m.  The new facilities are being built on an adjoining 20 acre site and were expected to be available in 2021 but planning permission was not in fact granted until December 2021.  If work commences in 2022 it is likely that the stages will become available in 2023.

The rest of the UK-today