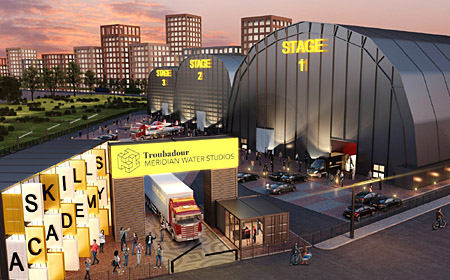 Meridian Water is a major regeneration scheme driven by Enfield Council – containing 10,000 new homes, public open spaces, shops, offices, factories etc.  It is based in the Lee Valley and makes full use of all the attractive waterways in the area.  This studio site is just off the North Circular in Edmonton.  Meridian Water railway station opened in 2019 and is a short walk away.

Troubadour Theatres is a company running large venues suitable for theatrical and music events.  You may recall that they took over the old Fountain Studios when they were forced to close down.  They also erected a temporary theatre at White City that opened in 2019 but had to close within a few months.  According to their LinkedIn entry, their vision is…

‘to create bespoke pop-up state of the art theatre venues of 1,000+ seats in London, throughout the UK and beyond.  These venues, offering unique theatrical experiences, will become go-to destinations housing spaces that are fully flexible, contemporary and impressive with the ability to showcase world-class entertainment whilst providing a greater audience experience for all.’

It now appears that they are branching out into providing facilities for the film and TV industries.  In any case, these new facilities will be broadly welcomed by the industry.  Although they have a temporary look to them, they are apparently soundproof and no doubt will last a number of years.  They resemble the ITV stage at Bovingdon where Dancing on Ice is made – and that venue has proved to be very successful.  Its steel frame is immensely strong, enabling large lighting truss rigs to be supported.

One of the first bookings is Damsel, a fantasy feature for Netflix, starring Millie Bobby Brown.  It began filming in February 2022.

A second phase is also planned.  This will be available from 2023 and will consist of three more stages plus two workshops and more offices.  One of these stages will be 40,000 sq ft and the other two 20,000 sq ft.  All 6 stages will represent a significant area of floor space for shooting films and high-end TV drama.  Large scale TV entertainment shows may also use these facilities, using OB trucks for technical support.