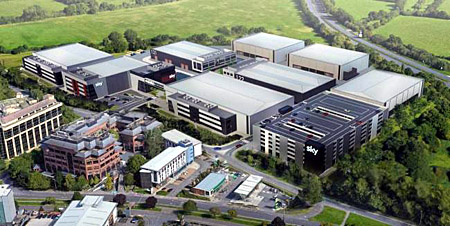 In December 2019, Comcast (the owners of Sky TV and Universal Pictures) made the surprising announcement that they were planning to build a large film studio centre in Borehamwood.  The site is at the eastern end of Elstree Way, between Rowley Lane and the A1, a few dozen metres from where the old MGM film studios were located.  Some of the land was at that time a lorry park.

So, just to be clear – these studios are in Borehamwood, not Elstree, but the owners decided to call them ‘Sky Studios Elstree.’ 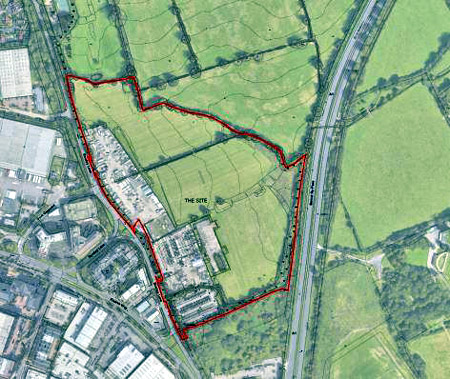 The proposed site (indicated above) is 32 acres and will contain 13 sound stages – one at 30,000 sq ft, two at 25,000 sq ft, eight at 20,000 sq ft and two at 10,000 sq ft.  Some stages will be able to be combined to create an area of 60,000 sq ft or reduced to become smaller spaces.  There will also be 2 large support buildings containing workshops, stores, production offices, wardrobe facilities etc and parking for 1,200 cars.  The land is owned by Legal and General, who are also part-funding the project.  A back lot has also been mentioned in some reports but this has not been indicated in any published plans, which is perhaps surprising.  Most new studio developments in recent years have included an area for building exterior sets. 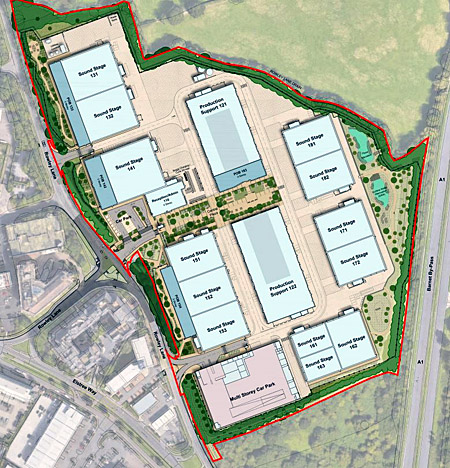 The studios will be home to Sky originals, as well as films from Universal Pictures, Focus Features and Working Title, and TV series from Universal Studio Group.  Other companies will be able to hire the facilities too when space is available.  Sky currently spend £7bn per year on production in Europe (including football rights) and they plan to invest £3bn in new production at the site over 5 years.

Planning permission has not been granted for studio audiences to use these facilities so they will not be used for multicamera TV entertainment shows.  These stages are purely intended for high-end TV drama and feature films.

Planning permission was granted in July 2020 and work was well under way throughout 2021.  The first stage was due to be available from April 2022 with the rest following throughout the year.  The first project to be based here is reported to be Universal Pictures’ film adaptation of Wicked.

In 2021 Hertsmere Council designated the block of land between the A1 and the existing development in Borehamwood a ‘Media Quarter’.  The Sky studios represent only a fraction of this.  To the north is land owned by Legal and General and north of that a large area owned by Gilston Investments Ltd where it is proposed to build Hertswood Studios, with 21 stages.

In April 2021 Legal and General put forward the site adjoining the Sky Studios (marked ‘B’ above) for consideration under Hertsmere Borough Council’s ‘Call for Employment Sites’ 2021 appeal.  They were suggesting that even more sound stages could be built here.  It is currently undeveloped open land that was previously earmarked for a centre of sporting excellence.  That planning permission was not implemented and has now expired.

In June 2022 some further information was released.  Sky revealed its intention to construct a further 10 stages plus supporting facilities on this site.  They sent out letters to local residents explaining their proposal and inviting comments.  This site is being called Sky Studios Elstree North.   As part of this scheme, Sky is also proposing to build a new ‘Sky Up Academy’ for students aged 14 to 18.  Apparently, further ideas include a museum celebrating the screen heritage of the town, which will be a popular idea with many people.  I am however surprised that there appears to be no back lot included in these proposals.

A planning application is likely to be submitted later in 2022.

If Hertswood Studios go ahead on the adjoining site with its 21 stages, this area will have 44 stages – plus of course the 9 stages at Elstree Studios just down the road.  (Following their expansion Pinewood will have 39 stages and Shepperton 31.)

As an interesting aside – most of the Bond films have been made at Pinewood.  However, those studios are now fully booked by Disney.  No Time To Die was distributed by Universal Pictures so it seems possible that Bond 26 could be filmed here in Borehamwood.  You heard it here first!