Should this studio be included in ‘London’s Film Studios’ or the ‘Rest of the UK?’  Well, I have included Arborfield Studios here, which are just down the road, and arguably the reason these studios are to be located here is because of their proximity to Heathrow and the M4.  Also, they are only 30 mins from Bray, 35 mins from Pinewood, 40 mins from Shepperton and 50 mins from Leavesden (all on a good day!).  The point being that the crews working in these new studios will be the same freelancers who will be working in all those other major London studios too.

In March 2018 Thames Valley Science Park opened on land just south of the M4 at Shinfield, near Reading.  It is owned and managed by the University of Reading, although it actually lies within the borough of Wokingham.  The initial buildings cost £35m and were part funded by the EU.  Soon after opening, the Gateway building hosted about 20 bioscience and technology-led companies providing laboratory and office space.  The Rutherford Centre, which opened later, houses a £30m cancer treatment research centre, including advanced proton beam therapy.

This first phase now provides a world-leading productive environment for tech companies, able to exchange ideas and collaborate on projects.  More than 80 Health & Life Sciences and Innovation & Technology businesses were based here early in 2020.  Alongside these buildings is an area earmarked for Gateway Building 2.  More info on what is now planned for this site later.

Another exciting part of this development is a £27m research and storage facility for the British Museum, which is due to open in 2023.

In 2017, outline planning permission was granted by Wokingham Borough Council for phase 2 of the Science Park, which was to consist of about 15 buildings to be constructed over a decade and a half.  So it came as quite a surprise when American movie studio Blackhall announced in February 2020 that they had been negotiating with the University of Reading to build a large film studio and ‘creative hub’ on the remaining land here.

Blackhall is the company responsible for films like Godzilla: King of Monsters, Venom and Jumanji: The Next Level and their US studios are where the sequel to The Shining – Dr Sleep – was filmed.  They are based in Atlanta, Georgia and are said to specialise in movies that use the latest technology.  They claimed that these studios would be the most high tech in the UK.  The company said they planned to make between 5 and 7 features here per year.  According to the press – Ryan Millsap, chairman of Blackhall, said that their US based clients such as Disney, Universal and Sony were all asking them to expand into the UK to meet their desire to create productions here.

The films produced here are expected to bring £500m to the UK economy each year.  It is claimed that the studios will provide 1,500 jobs.  Some of these will of course be locally based people but many will be experienced freelancers who will also be working in other studios and on location all over the UK.  However, the extra work will provide plenty of opportunity for training and giving relative newcomers to the industry much needed experience, which is clearly a very good thing.

These studios were originally due to be called Cine Valley Studios but in December 2020, Reading University announced that following consultation with the local community, it had been decided that they would be known as Shinfield Studios.  They also revealed that the university had entered into an agreement with affiliates of Commonwealth Real Estate LP – a film studios investor based in Los Angeles.  They have signed a 199 year lease with the company.  However, despite this new company being involved it appears that the studios will still be operated by Blackhall Global Partners.

A ‘Screening Opinion’ document was submitted to the local council in January 2021.  This formed the basis of discussions with the council before actual planning permission was sought.  The scheme was broadly welcomed by the leader of Wokingham Borough Council, the local authority.

The plans indicated 18 stages totalling around 450,000 square feet plus all the usual support facilities and will reportedly cost £150m to construct.  (For comparison, in 2021 Pinewood had 24 stages, Leavesden 19, Shepperton 14 and Sky/Universal Elstree studios will have 13 stages.)  There will also be 355,000 sq ft of workshop space. 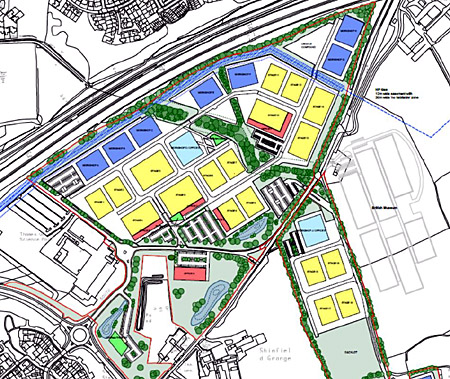 In March 2021, planning permission was granted for an initial phase of this development.  This occupies most of the land at the lower right in the drawing above where an office block, four stages and the back lot are indicated.  This was for 4 temporary sound stages and four workshops, all of which would be built in just a few months.  Interestingly, a condition of the permission was that the land must be returned to its former agricultural condition after 5 years.  According to press reports, a well known movie franchise was keen to start shooting here very soon and if these stages had not been available it would have been made in Los Angeles.  Later it transpired that Disney was the company booking the stages – rumours suggested it was for the Star Wars franchise.  At first, filming was expected to commence in the temporary stages from October ’21 but later announcements set the date for filming as early in 2022.   In fact it looks as though November 2022 will be the date for commencing filming – according to the press the Star Wars series The Acolyte is due to start filming here then.

On May 28th 2021 a full planning application was submitted for 18 stages plus workshops and offices, including replacing the 4 temporary ones.  The application was unanimously approved by Wokingham Council’s planning committee on October 13th, although they decided to refer the decision to the Secretary of State for Housing, Communities and Local Government.  The planning officer said the referral could delay work on the project by three to six weeks but he argued that it ‘would be best from a challenge point of view to refer it and go down that process.’  The decision to go ahead was fortunately confirmed in December 2021.

In an interview for The Knowledge in May 2022 Nick Smith, joint managing director of Shinfield Studios revealed some interesting facts.  He stated that the 4 rapid-build stages that were built in 2021 were up and running with their first production in them.  He also said that these stages are by no means ‘temporary’.  They will not be replaced, as was initially assumed, but have been built to a demanding specification which will see them in use ‘for many decades to come’.   He also said that although Disney was the first client, a production for a global streamer was underway.

Construction on the main site commenced early in 2022.   They expect to open more stages by the end of the year with another phase opening in 2023 and completion of the whole site in 2024.

NB – In August 2020 Reading University announced that they were also proposing to build a fully-equipped multicamera TV studio on the Gateway Building 2 site next to the existing buildings in association with BBC Studioworks.  This was due to open in 2022 but the photo higher up this page indicates that no progress had been made by July of that year.  More info on the ‘Independent TV Studios’ page.