This ‘studio’ is in this section because it is basically a 4-waller sound stage, with no resin floor or built-in technical facilities and no lighting grid.

Bovingdon Airfield is located south-west of Hemel Hempstead, north of the M25 about 8 miles from Leavesden Studios.  It closed as an airfield in 1972.  Most of the old RAF buildings have been demolished and the area they occupied has has been converted into a prison.  Activities on the remaining site include driver training, motor sport events, paintballing and a regular Saturday market.

The facilities here are divided between two businesses – ‘Bovingdon Airfield’ and ‘Runways Farm.’

RAF Bovingdon (not to be confused with Bovington Camp in Dorset, where the army has its tank museum) was constructed as a bomber airfield in 1942.  After a few months’ use it was handed over to the USAAF who based several squadrons here during the war, mostly flying B-17 Flying Fortresses.  It returned to RAF use after the war but was then handed back to the USAF between 1951 and 1963, when C-47 Skytrains were located here.  After the USAF left, the airfield was used as a base for the Air Training Corps, who had gliders here between 1968 and 1970.

The airfield has been used for various feature films over many years including 633 Squadron, Battle of Britain, Mosquito Squadron and The Man With The Golden Gun.  In 2015 it was used to film scenes on the planet Scarif for the Star Wars film Rogue One.  Wembley Stadium (or at least, part of it) was also constructed here for the Live Aid scenes in Bohemian Rhapsody and some of the World War 1 trenches that feature in the film 1917 were dug here.  Other recent features to have shot scenes at Bovingdon have included Justice League, Fast and Furious 6, Harry Potter and the Deathly Hallows pt1, Fury, Anna Karenina, Sherlock Holmes: A Game of Shadows and Unwelcome.

TV dramas to use the airfield many years ago included Blake’s 7 and The Avengers – and the opening title sequence of The Prisoner, with Patrick McGoohan driving his Lotus Seven, is said to have been shot on one of the runways back in 1966.

In November 2021 Variety magazine revealed that season 2 of the Lord of the Rings prequel ‘The Rings of Power’ being made for Amazon Prime would be using Bray Studios as its new UK base.  It was also mentioned that Bovingdon Airfield would be used to build some exterior sets.  Filming is due to commence in 2022.

Dancing On Ice was a popular programme made by ITV in George Lucas Stage 2 at Elstree between 2006 and 2014, apart from 2011 when it was made at Shepperton.  It was then axed and was assumed to have run its course.  However, in Jan/Feb 2018, ITV brought it back with a few format changes but the stage at Elstree was unavailable so an alternative studio had to be found.  Clearly it had to be large enough to accommodate the ice rink and surrounding set so this limited the options.

In fact, they decided to create a temporary studio at Bovingdon for the show.  This consisted of a structure similar to those used for exhibitions or events.  It had PVC sheets at the gable ends and thin, uninsulated panels in the side walls – described to me rather brutally as a huge tent.  A smaller enclosure was erected alongside to house a practice rink for the contestants.  This experiment was not entirely successful.  It was very cold inside and the structure moved alarmingly in any wind – the follow-spot operators who were hanging from a truss had difficulty following the skaters at times, as they were swung about by the flexing metalwork.  One week in a stiff breeze the gable end blew in and parts of the roof tore off.  Not an experience any of those involved wished to repeat.

The principle of using Bovingdon was deemed a good idea but it was acknowledged that the structure they used for the 2018 series was far from ideal.  So in the summer of that year a far more substantial steel, warehouse-type building was constructed with 80mm insulated panels in the walls, sitting on a bespoke concrete pad.  This stage is 220 x 106ft wall to wall with a 5ft firelane running all round the working area.  So, pretty big as TV studios go.  In fact, enormous.  Large enough to accommodate the main DOI set at one end and the practice rink behind a black drape at the other.

I have visited the studio and it really is impressive.  The roof structure has a very high weight loading, enabling trussing to be rigged anywhere you choose.  Very complex lighting and sound rigs can be carried out.  Alongside, and connected via a corridor is a supporting ‘village’ of temporary buildings that feel very permanent when you are in them.  There are ample dressing rooms, wardrobe stores, offices, green rooms etc for the largest of productions.

There is a 1.25MW high voltage power supply to the site, which is more than sufficient.  The live shows use generators in case of a power cut but in the first year of use, generators had to supply power every day throughout the run of the series – a constant stream of fuel tankers came and went.  Thank goodness this is no longer necessary.

The production gallery is an OB truck from Telegenic – with its double folding sides it forms a larger room than in any permanent studio I have seen.  The cameras are racked in a temporary building alongside and lighting control is in another large and comfortable temporary building.  It is all very impressive indeed. 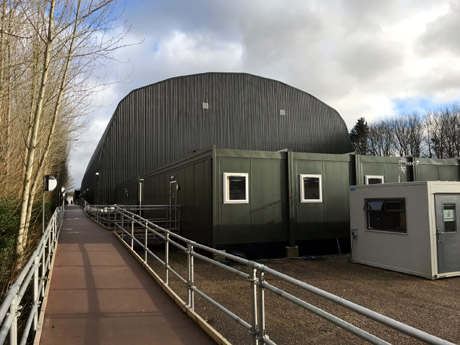 The 2019 series of Dancing On Ice was the first TV show to use this facility and later that year it was the location for the UK version of The Masked Singer – a format originating in South Korea.  The sheer size of the building enabled a set to be built that looked massive on camera.  Series 2 was recorded in 2021.  The 2020, 2021 and 2022 series of DOI were also made in this ‘studio’ and ITV’s new talent show Starstruck was recorded here in 2021.  Although owned by ITV, the facility was used in 2020 and 2021 to record series 1 and 2 of Michael McIntyre’s popular BBC1 gameshow The Wheel and in 2019 the stage was used to film a 3-part adaptation of A Christmas Carol, starring Guy Pearce, for BBC1.

According to the tabloid press, the site is said to be haunted with some people experiencing a ‘creepy presence’ and a number of ‘unexplained incidents’ having happened over the years. These have included odd sounds and smells, and a mysterious mist that follows people around.  I’ll just leave that here.