In 1968, London Weekend Television was the new company in town.  ATV had been thought to be going a bit down-market by the ITA, and LWT were seen as being likely to be more highbrow and produce better quality programmes.  Fancy that.

Surprisingly to many people, particularly themselves, Rediffusion (they had dropped the ‘Associated’ in 1964) lost its London weekday franchise.  Rediffusion were not only very upset at losing it, they were forced into a merger with ABC to create Thames but with only a 49% stake, so were the underdogs in the partnership.  They were thus hardly in the mood to be cooperative regarding handing over their studios.  There was a period of several months after the announcement when they seemed to be reluctant to dispose of their Wembley studios to LWT, who were desperate for somewhere to make programmes in the short term.  There were ugly words exchanged in the press with LWT blaming Rediffusion for being difficult.  However, others claimed that this was all a smokescreen and it was LWT who were being slow in deciding where to go.  Insiders suggested that they really wanted Teddington (and ABC’s staff) – but there was no way that ABC would give all that up.  Eventually the ITA banged heads together and LWT moved into Wembley.  It was only to be a short term occupancy anyway.  They always planned to create a purpose-built centre of their own and as soon as it was ready they would be off.

Thus LWT leased the Wembley studios from Rediffusion, moving in on 6th May 1968 – less than three months before they began broadcasting.  Meanwhile, plans progressed for their new studios on the South Bank, next door but one to the site earmarked for the new National Theatre.  (The NT opened its first auditorium in 1975.)  Many Rediffusion staff stayed on at Wembley and became the core of the new LWT. 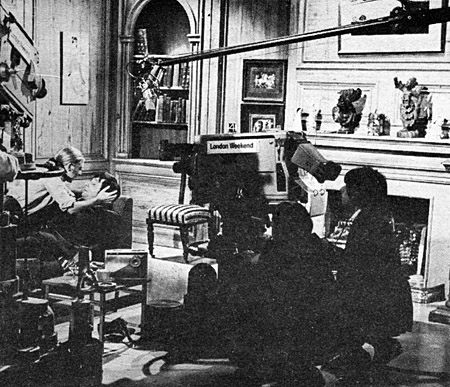 The opening night of LWT’s broadcast from Wembley did not go well.  Within seconds of their first big comedy show beginning, the staff walked out on strike.  A strike that was to spread to most of the other ITV companies, giving the BBC a big advantage just when LWT needed to make its mark on weekend television viewing.  After a shaky start, which saw a number of senior managers come and go, the company began to establish itself with a mix of popular drama such as Upstairs Downstairs, variety shows starring Tommy Steel, Rolf Harris, Dickie Henderson and Ronnie Barker and successful comedies such as Doctor on the Go, Doctor at Large, Please Sir, The Fenn Street Gang and of course – On the Buses.  Several of these series eventually transferred to the new studios on the South Bank.  More serious programmes included Aquarius which later became The South Bank Show.

Other programmes made here between 1968 and 1972 included the regular studio debates and current affairs/satire programmes Frost on Friday, Frost on Saturday and Frost on Sunday.   David Frost was a key member of the team that set up LWT and his influence over it was crucial to its eventual success.  He had previously been making The Frost Programme for Rediffusion so knew these studios well.

Incidentally, if you want to see a bit of TV history, go to YouTube and look at Frost’s interview with Oswald Mosely, recorded here on 15th November 1967 for Rediffusion.  Extraordinary television.

Peter Middleton recalls that LWT hardy ever used the big studio with the doors open.  In fact, he can only remember one occasion – the night of the first moon landing – when the old studio 5 was used as it was originally intended.  He recalls Cliff Richard (for it was he) at the far end of the studio and tracking the Mole crane up the studio towards him.  He could not believe how long it took to reach him.  Some might wonder was it worth the journey but I couldn’t possibly comment.

LWT began broadcasting on 30th July 1968, only a relatively short time before the official launch of colour on ITV in November 1969.  They therefore found themselves with the huge expense and upheaval of converting the Wembley studios to colour, as they could not wait until 1972 when they would be moving into their new South Bank studios which were designed for colour from the outset.

Four studios were colourised – 1, 2 and 5A & 5B.  (LWT renamed 5A and 5B ‘3’ and ‘4’ respectively.)  Twelve EMI 2001s were shared between these studios with a further four being installed in an OB unit – which Rediffusion had helpfully ordered for themselves in 1967.  Studios 1 and 2 shared four cameras and 3 and 4 had four each.  Converting each studio to colour was a massive undertaking which another source states was carried out between January and August 1969.  Each studio gallery suite was naturally unavailable for use during the work so studio 4’s gallery was used as a remote operation working in monochrome until each gallery was complete.  In fact, for a while, the floor of the old studio 4 was used as the control room for World of Sport, which came from studio 2.  I hope you’re keeping up with all this.

David Taylor tells me that Studio 4 was then turned into a band room.  It was known as ‘Studio S’, later becoming Intersound Recording Studio in September 1970.  Sadly, it was lost in a fire in July 1972.  He tells me that it burned very well as the old 1930s acoustic treatment on the walls was straw, with plenty of newer padding contributing to the blaze.  The studio was never rebuilt.

Unfortunately, the conversion to colour did not go smoothly.  From November 1970 to February 1971 there was an industrial dispute by ITV technicians relating to working in colour.  Thus, programmes made and transmitted during that period were in black and white.  Upstairs Downstairs was a victim of this and the glorious sets and costumes were all seen in monochrome for the first six episodes.  The first episode was later remade in colour for the export market – rewritten to sum up the plot lines of the other episodes which overseas TV companies refused to buy since they were not in colour.