At the beginning of 1993 Thames TV lost its franchise to provide ITV programmes to London on weekdays.  However, for a while the company remained at its Teddington base and marketed the studios there as an independent facility.  Thames was bought by publishing giant Pearson soon after the loss of the franchise.  In 1997 Pearson decided that they no longer needed to operate a large studio centre and transferred their remaining Thames production staff to their central London HQ in Stephen St, just off Tottenham Court Road.  Not wishing to completely make do without any production facilities of their own, they converted two areas on the ground floor into studios 1 and 2. Studio 1 opened at Easter 1997 with a show called Five’s Company.  This ran for about six months and was replaced a few months later by Gloria Hunniford’s Open House. 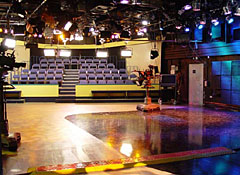 Studio 1 was probably the most curiously shaped studio in London.  It was 2,672 sq ft but as the plan above indicates – its shape is hard to describe!  It also had a relatively low grid (12ft 6ins).  To complicate matters further, there were two large pillars (not shown on this plan) taking up some floor space that brought out the best in ingenious set designers.  Nevertheless, it could seat an audience of 75 and as can be seen from the photo, was quite a useful size.  It had a well-equipped gallery and five Sony BVP550 cameras.

Studio 2 was 1,550 sq ft and was a more conventional rectangle 49 x 33ft wall to wall.  It had a much higher grid (18ft) and a 360 degree cyc track.  It too had a gallery with all the necessary kit and had four Sony BVP550 cameras.  The studio opened in the autumn of 1997 with Give Us A Clue.  Then UK Living took over the studio for about a year, using it for a range of programming.

There was also a ‘Studio 3’, run by the same company in the old Talkback HQ in Newman Street.  This was a little under 30 x 30ft wall to wall but had no technical equipment other than a small lighting rig.  It was sometimes used for single-camera interviews or links to camera.

The Stephen Street office building is very large and contains an atrium in the centre.  This space was equipped with a lighting truss and was used occasionally for programmes as an interview and performance area.

Since 2001 Thames has been part of the FremantleMedia group and following its merger with Talkback Productions operated as the highly successful ‘talkbackTHAMES’.  Many productions made by this company used these studios over the years but they were also available for hire by other companies.  In 2003 I lit a spoof Alan Partridge documentary in studio 2 called  Anglian Lives and in 2006 I was LD on a pilot for a new breakfast show for C4 in studio 1.  I found the studios well-equipped and a very pleasant place to work.

Studio 1 was the home of Gloria Hunniford’s Open House for Channel 5 from April 1998 to December 2002.  Amongst other things the studios were host in later years to ITV’s (somewhat controversial) Quizmania (studio 2, Aug ’05-Jan ’07), MTV’s All Eyes on Tony Blair and insert material for The X Factor, Grease Is The Word and Britain’s Got Talent.   It was also the home of Five’s new version of Going For Gold.

In October 2008, Stephen Street announced a surprising tie-in with Pinewood.  This link had Pinewood’s sales team market the studios to clients looking for smaller or central London-based premises.  According to a press release, Pinewood took a cut of any jobs it drove to Stephen Street with the percentage dependent on the nature of the contract.  Pinewood’s sales director Paul Baker was quoted as saying that he believed there were great synergies between the two companies.  “Stephen Street has studio space at 900, 1,500 and 2,700 square feet, our studios range from 4,500 to 9,000 square feet.  This means we can offer space to light entertainment clients looking for smaller facilities.”  I have not discovered how successful this arrangement proved to be.

It’s worth mentioning that Stephen Street was also the HQ for several other channels – including The Disney Channel, several Discovery channels and a shopping channel.  None of these made use of the studios here.  The Disney Channel had been launched at Teddington in 1995 and moved its operation to Stephen Street in late 1996/early 1997.  Studio facilities were then provided by Corinthian Television at St John’s Wood Studios.  In 2002 Disney moved to Chiswick Park.  Thanks to George Douglass for some of the above info.

In the summer of 2010 talkbackTHAMES ceased production of  The Bill in its Merton studios and those facilities were sold off.  At the same time the company decided to close these studios down, partly as a cost-saving measure but also probably because the cost of upgrading to HD would be far too great to justify the investment.  Thus London lost yet more small TV studios, joining the list of 124, Capital, Molinare and MTV Camden.  Following that of course, very useful small studios were also closed at TV Centre, Teddington and TLS.

However, Fremantle continued to invest in post production at Stephen St.  In October 2015 they announced a significant increase – they created 21 more picture and audio suites, reducing their dependence on outside companies and bringing this activity in-house.