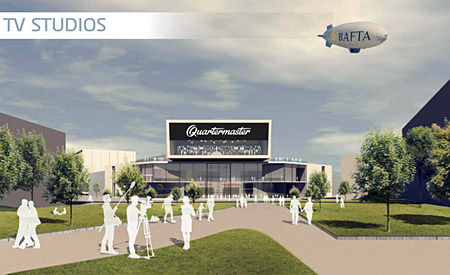 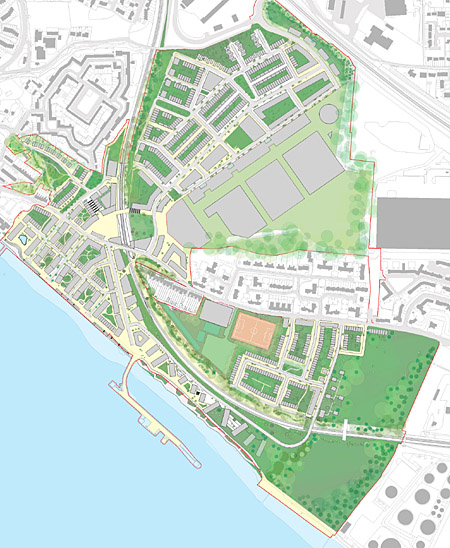 In May 2013 outline planning permission was granted for a highly ambitious plan to completely transform the centre of Purfleet including the area that fronts the Thames.  If you’re scratching your head and thinking – ‘Hmm Purfleet. I’m sure I’ve heard of it but not sure exactly where…’ Let me explain.  If you follow the Thames out of London, just before the M25 crosses the river, on the northern bank – that’s Purfleet.  It is, incidentally, only half an hour by train from Fenchurch St Station.

It is, to be frank, not the most beautiful part of London at present, with a number of old industrial buildings and lots of undeveloped brownfield sites.  The plan is to turn all this into a thriving centre with shops, offices, riverside marina and – studios!  Not just film stages but fully equipped TV studios.  Proper ones of a decent size that can replace some of those lost in London over the past decade.  It’s not clear from the plans quite how many but I have heard that 3 – 4 large TV studios and about half a dozen sound stages are proposed.

Each phase of the scheme will have to submit a detailed planning application, known as a ‘reserved matter’ application.  So far, only some housing has been fully approved.  The next proposals include major road building and the construction of schools, a new railway station, shops and more housing.  The film and TV studios are way down the list so realistically, a reserved matter application for them is not expected for a few years yet.  It therefore seems unlikely that they will be available before 2025, maybe even later.  Still – all good things come to those who wait.

The film and TV studios along with supporting workshops and offices will total an impressive 135,000 sq metres. The desire to include studios and associated facilities is very much driven by the local council, who see this as a key aspect of the whole scheme.  They see it tying in with the existing Backstage Centre – a very well equipped training base associated with South Essex College.  A company called Quartermaster were associated with the studio side of the project from the beginning but I have been told that the speed of development (or rather, the lack of it) has been driven by the Council and the developer rather than Quartermaster, who I was informed would have loved to have been up and running long ago.

In December 2020, Quartermaster advertised a number of other studio projects they were planning.  Sadly, one year later I could find no information on the progress of any of them.  In fact, the Quartermaster website no longer exists and my emails to them have been unanswered.  It does seem possible therefore that they are no longer linked with this project either.  If you have any info on this, please get in touch.

Unfortunately, these plans have not been universally welcomed.  The local MP, Jackie Doyle-Price is quoted as saying  ‘I don’t think that the proposals for TV and film studios are in any way viable.  The proximity to the Channel Tunnel Rail link generates noise which makes filming impossible.  This is well known to the developers.  It is therefore of genuine surprise to me that the proposals remain part of this planning application.’

I haven’t visited the area so I don’t know how much noise is created by the railway but I do know that several other studios are located near busy roads and railway lines.  The new Pinewood stages are visible from the M25 and the old stages at Twickenham are next to a main line track.  Even TC1 at TV Centre has a tube train viaduct and a busy road right next to it so I really don’t think it’s impossible to build sound stages and TV studios with effective soundproofing.

So maybe, just maybe these studios will be available from 2025.  It just seems a shame that it is all taking so long when the proposals for the whole scheme were announced way back in 2012.