This studio was created for the Channel 4 breakfast show RI:SE.  It was a co-production between BSkyB and Princess Productions.  The show began broadcasting in April 2002 from Sky’s studios in Osterley but transferred to this new studio in January 2003.  Unfortunately the show only lasted here for a year – its last transmission was on 19th December.  The programme was never a huge success – certainly not as popular as its predecessor The Big Breakfast had been.  There were a number of presenters involved – it seemed that the producers were trying hard to find someone the public would latch onto.  The final pairing was Iain Lee and Kate Lawler.

Princess Productions had been set up in 1996 by Henrietta Conrad & Sebastian Scott.  Conrad had previously produced The Big Breakfast and Jonathan Ross’ Channel 4 show, The Last Resort whilst Scott was responsible for launching and executive producing The Big Breakfast.  He also worked on The Word and in 1987 won a BAFTA award for Network 7, the groundbreaking youth magazine programme made at Limehouse Studios.

Princess have been responsible for many successful productions shown on all the major channels.  Most were made in London’s major studios like TLS, TV Centre, Teddington and Pinewood.  Others have been single camera location-based shows.

One of Princess’ successes was The Wright Stuff – Matthew Wright’s morning show for Channel Five.  This began broadcasting in September 2000 from Anglia’s studios in Norwich.  However, it transferred to this studio when it became vacant following the cancellation of RI:SE.  The show remained popular with many viewers but was not without some controversy – for example the name of Ulrika Jonsson’s ‘mystery rapist’ was revealed on the programme.

The studio was kept busy on Sunday mornings too – BBC 2’s cookery and chat series Something For The Weekend began in October 2006 and proved to be very popular.  Due to cuts in daytime programming budgets, it was axed on 18th March 2012.  However, Channel 4 saw its potential and the show transferred to their channel – with a few tweaks and a name change to Sunday Brunch, beginning one week later on 25th March 2012. 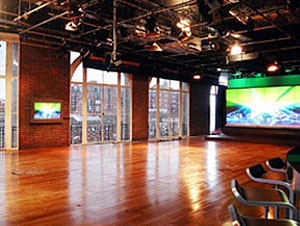 The studio was on the third floor of the Whiteley’s Centre in Queensway, Bayswater.  It occupied 2,500 sq ft and was very nicely equipped with a smart production gallery which looked out onto the studio through glass walls.

The room had a unique look on camera, with timber floor and large leaded-light windows on two of the walls.  Despite the obvious problems of mixing daylight with the studio lighting, the productions made here never seemed to struggle with this.  In fact, the daylight gave the pictures an ambience that was ideally suited to daytime shows.

The studio also had some audience seating and an 8 x 14ft video wall.  It was equipped with black, white and green cycloramas.

In May 2017 Endemol Shine announced that Princess Productions would close at the end of 2017.  The Wright Stuff ran to December.  Channel 5 put the show out to tender and ITN won the contract.  The new show, presented by Jeremy Vine, is made in ITN’s studios.  Meanwhile, Sunday Brunch is now made by Remarkable Television.

The building containing the studio was due to be redeveloped and it was thought that it would close at the end of 2017.  However, it had a stay of execution and was still in use for Sunday Brunch until 16th December 2018, when it did finally close.  The show moved to TC2 at Television Centre, which is also used by Loose Women, Lorraine and Peston.