Towards the end of 1972 Stefan Sargent, his wife Tricia and a friend called Robert Parker were looking for a sound studio to record a radio programme that would be sold worldwide – ‘The Bee Gees Story’.  They were introduced to Michel Molinare, a retired fashion photographer who happened to own a lease on a large basement in Stratford Place, near Selfridges.  Sargent paid for the rental and a small premium to use Molinare’s name.  Thus the first Molinare studio was created.  It was immediately booked for a year by Capital Radio, who made ads and weekend radio shows in the studio.  Other bookings followed and after a few years the business was looking to move to larger premises.

In February 1978 Molinare moved to its present HQ in Foubert’s Place, Soho.  The old warehouse/office building (dated 1875) was converted to include a studio on the ground floor with a scene dock door opening directly onto the street.  This door must have been the warehouse’s original goods access judging by its appearance.

By now the business had moved into filming and editing TV commercials so this studio was primarily intended for that use.  Rod Allen has written to me – he claims some of the responsibility for persuading Stefan Sargent to expand into television.  Rather like Keith Ewart ten years earlier, Stefan believed that video had a role to play in making commercials as well as 35mm film.  Such ads could be made much faster and cheaper and he saw a gap in the market in providing facilities for this.

Of course, the post production and editing side of the business continued to develop and Molly’s has retained its reputation for excellence in this field to the present day.  However, the main TV studio also found a market for small scale TV programmes made by independent companies for the main broadcast channels.  When C4 launched in 1982 this provided another useful market for the facility.

1982 also saw another client arrive in the building.  A company called Satellite Television UK (SATV) was founded by ex This Week researcher Brian Haynes.  This channel broadcast to cable networks across Europe on the OTS-2 Orbital Test Satellite.  The company’s offices were based in Molinare’s building and the transmission was handled from here, Studio 2 being used for live continuity.  The business was, however, unsuccessful and was purchased in 1983 by Rupert Murdoch for £1.  He renamed the channel ‘Sky’ (you may have heard of it) and the operation moved to TVI in Soho in January 1984. 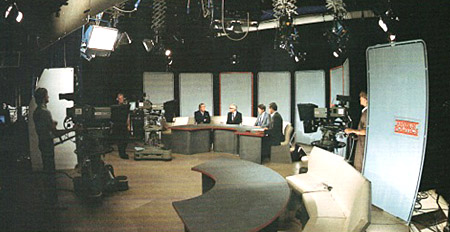 The main studio was used occasionally to record pop promos.  For example, Blondie’s Hanging on the Telephone was recorded here back in the ’80s.  It was of course also used for a wide range of TV programmes over the years – I worked there myself in 2003 on a C4 chat show called Dirty Laundry.  It was also notably used for the first televised Mayoral debate in 2008.

Studio 1 was about 50 x 35 ft (1,750 sq ft) and was the only drive-in television studio in London’s West End.  It had a flexible lighting grid and on the first floor was a large production gallery adjoined by the sound control room.  Despite its small size, studio 1 could offer audience seating for 60 and there were the usual production offices and some set storage.

Studio 2 was 28 x 14 ft with a full lighting rig and gallery which was air-conditioned and sound proofed.  It was used as both a conventional green/blue screen studio and fully integrated with Molinare’s ORAD Cyberset-NT 3-D VIRTUAL Studio system.

Bruce Cocks has contacted me and informed me that during the 1990s Molinare Studios were called VMTV studios.  In turn this was owned by WH Smith Television. (VMTV was derived from Visions Mobiles from which some of the original company directors were still involved.)

Sadly, studio 1 was closed in May 2009 and converted into one of the largest colour grading theatres in central London.  Like many small studios, the cost of converting to HD did not make economic sense but the space has now become a real asset to the business.  Studio 2 closed towards the end of 2009 and was also converted into a grading suite.