Stockley Park is an attractively landscaped business park in West Drayton, a little to the north of Heathrow.  The area of around 400 acres was originally a number of gravel extraction pits and later a waste tip.  From 1985-1994 the site was transformed into a business park on the American model previously unseen in the UK – high quality pavilion buildings surrounded by a network of lakes and footpaths.  The building IMG now occupy was designed by Foster and Partners.

IMG is a global sports, fashion and media company.  The Broadcast Magazine survey of top independent production companies put IMG Media as number 1 in a list of 143 with a turnover in 2019 of £740m.

In July 2013 IMG Productions and IMG Studios began operating from 5 Longwalk, Stockley Park.  They moved from premises on the Hogarth Roundabout in west London which they had occupied for the previous 6 or so years, trading as ‘Mediahouse.’  They adopted the name ‘IMG Studios’ on the move to the new location.  The operation in Chiswick continued throughout the autumn of 2013 with a phased move to the new location which was completed in the summer of 2014.

IMG is said to be the largest independent producer of sports programming in the world.  From Stockley Park several TV channels and sports related shows are made and/or transmitted.  These include Premier League Productions, European Tour Productions, SNTV, EUFA Champions League Magazine Show, FIFA Football Mundial, Trans World Sport, Origin Digital and Rightster. Perhaps surprisingly, the BBC’s Football League Show is also made by IMG in these studios (previously at Mediahouse.)

The building contains 4 TV studios – two at 2,000 sq ft and two at 1,000 sq ft.  When I was there in 2017 another large room had also been converted into a studio for a long-running sport show.  There are 13 production galleries, 72 edit suites, 4 sound dubbing suites, five radio studios, five transmission suites and a master control room.  As you can see, this is not a small-scale operation.

The building contains one of the largest data centres built in Europe for digital media and broadcast.  There is a great deal of redundancy allowing for expansion.  The site also has its own satellite farm.

Not all of the studios are permanently booked for sport shows and one or two are often available for other productions.  I worked there myself for a day in September 2017 in studio B, lighting a lost scene from an old Dr Who episode that had to match the original footage.  We shot it on an Ikegami HL79 tubed camera to recreate the 1970s look – it was supplied by Dicky Howett of course.  The great Tom Baker walked into the studio in his coat and scarf, looked round with that huge grin and boomed to us all, ‘Here I am – back from the dead!’  Wonderful. 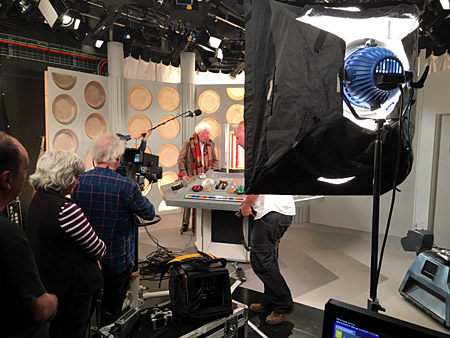 I found the grid to be relatively low but well equipped with a range of small lights – and the studio building is smart and pleasant to work in.  We were made to feel very welcome by all who worked there.

When TV Centre closed in 2013, the BBC’s hub and sub-mix for the Eurovision Song Contest moved to BBC Elstree but since 2015 it has been at IMG.  The announcement of the voting jury comes from one of the studios here.  When the Covid-19 Pandemic prevented the normal presentation of Question Time with a live audience, that programme moved here until the autumn of 2021, when it was able to go back on the road.