This centre was located in in Bushey, near Watford.  For forty years it was unique amongst London’s TV studios since although it was fitted out to full broadcast standards with two TV studios and two radio studios, it was not built to make programmes for any of the main network channels.

J Arthur Rank was well known as a very influential figure in the British movie industry, at one time owning several of London’s film studios including Denham and Pinewood.  His father had been a very successful miller and that company, which Arthur inherited, became the giant Rank Hovis McDougall.  His company – The Rank Organisation – also went on to own 619 cinemas.  As well as having a passion for film he was a hard-nosed businessman and his company took over several other businesses involved in the entertainment industry.  Literally tens of thousands of people were working directly or indirectly for The Rank Organisation when it was at its height in the sixties and seventies.

What is perhaps not so well known is that he was a devout Christian and very active in the Methodist church.  His original intention was that the films he produced should display good family values and be a counter to the ‘bad’ influence of Hollywood.  Whether all his commercially made films actually achieved this aim is debatable and to counter such criticism, Rank also directly funded films with moral or Christian themes that could be shown in churches and Sunday Schools.  Building on this he set up a trust in 1953 that later became the Rank Foundation.  This organisation provided funding for the promotion of Christian belief.  Rank considered that with the expansion of the influence of television it was essential that the Christian message should be promoted using this medium as professionally as possible.

During the ’60s and ’70s both the BBC and ITV broadcast religious programmes – usually late at night (e.g.  The Epilogue) and for an hour or two on Sunday evenings.  These programmes often included contributions from people working in various churches – not just the Methodist Church of course – and there was a perceived need to train these individuals so that on screen they would appear confident, professional and at ease.

Another requirement was to produce television programmes that could be shown to church members in their own premises on tape or 16mm film.  These could be used as a basis for discussion or study.

To fulfill these needs, in 1959 the Rank Foundation set up CTVC – the Churches Television and Radio Centre – which established its base at Hillside Studios in 1965.

Following the death of Rank in 1972, Hillside expanded its activity to include general training in various aspects of television directing, interviewing and presenting.  There were a number of radio courses too that were very popular with those looking for a career in the rapidly expanding world of local radio.  The technical crews were a mix of staff, freelancers and a number of BBC and ITV staff who regularly topped up their salaries with a bit of moonlighting.  Dave Mundy recalls that one of the reasons he enjoyed working here was that he was provided with free lunch, tea, coffee and sometimes even beer.  Sounds like good Christian charity in practice to me.

As well as the training activities and making of material for churches, there was some programme making that was broadcast too.  CTVC Productions was a production company that as early as the 1970s was making religious programmes here for the BBC and ITV.  They also sold programmes to American TV companies – in 1976 Project the Right Image won the Silver Screen Award. 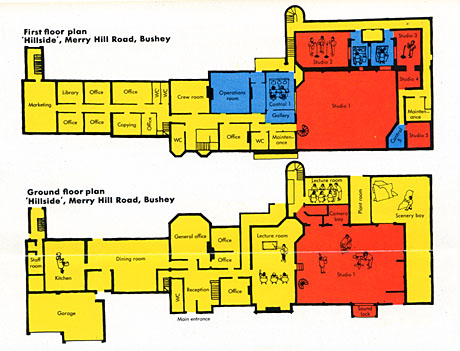 In 1972 the centre converted its studios to colour and re-equipped with Marconi Mk VIII cameras. Programmes were recorded on an Ampex 2″ quad machine and some were later transferred onto 16mm film or onto video cassettes for distribution. In the 1980s the cameras were replaced with Hitachi Sk-970s and Z31s. 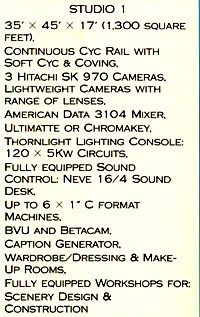 During the 1990s and into the next decade CTVC developed its programme making capability and sold religious programmes to the BBC, ITV, C4, Five and for transmission on US channels such as Discovery.  These programmes included single factual documentaries and series as well as light entertainment music specials and studio discussion shows.  Of course, not all of these were studio programmes but many were based here and used the facilities for post production.  However, as the years went by it became clear that the studios themselves were less and less important to the core activity of the organization.  Their website explains what happened…

‘In August 2005 CTVC started on a new chapter in its history, moving from Hillside Studios near Watford, its home for 40 years, to new premises near London’s Tower Bridge.  Fresh off the back of some of its most successful programme commissions in its history, as well as winning Britain’s premier award for religious broadcasting, “The Sandford St. Martin Award”, CTVC is right back in the centre of things.  Quite simply, we’re leading the way as a Public Service Broadcasting independent production company in an exciting new age of opportunities for PSB – fulfilling the vision of J. Arthur Rank.’