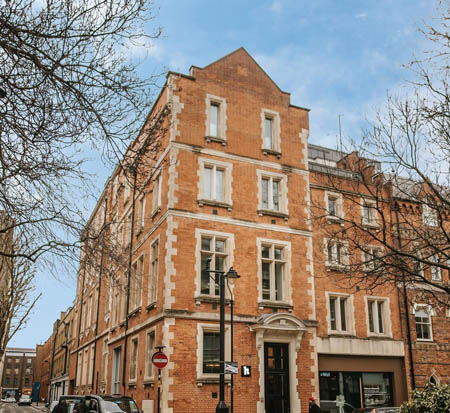 This unique and very old building is situated on the corner of Endell Street and Shorts Gardens in the heart of Covent Garden.

Between 2004 and 2020 The Hospital Club (later called h Club) was aimed at people working in the media and offered several bars and lounges, a gallery, some bedrooms and a high class restaurant.  Most interestingly, there were also recording studios and a TV studio.

Its somewhat unusual name is simply because the building used to be an actual hospital, first established in 1749.  It became known as St Paul’s Hospital from 1948 and in the early 1960s specialised in kidney and dialysis procedures.  The hospital closed in 1992 and was purchased by Paul Allen in 1996.  Most of the work in converting it to a club took place between 1999 and 2004.  The long delay before opening was partly due to planning issues with its change of use.

The TV studio was the first in the UK to be equipped with HD cameras and facilities – and that was way back in 2004.  It was the ‘vision’ of Paul Allen – co-founder of Microsoft, and Dave Stewart – late of Eurythmics and more recently a successful music producer.  They decided to build a facility containing a state of the art music studio which would also incorporate television facilities so that musicians could record both sound and vision to the highest quality.

In fact, they sensibly realised that such a studio would have a market for other types of TV shows – not just those with music.  The studio therefore was equipped with two sound control rooms.  One a standard TV-type gallery and the other much larger one with all the facilities of a professional recording studio.

The television studio is about 61 feet x 44 feet and thus is similar in size and shape to TC2 at Television Centre.  However, the grid height is only 14ft which somewhat limits the height of sets.  The studio is two floors below street level so all scenery and props have to be loaded in via a lift.

When it opened, the production control room was quite unique with regard to its monitor stack.  It didn’t have one!  In fact, there were two huge back-projection screens and the ‘monitors’ could be displayed on them in a variety of configurations.

As well as being used for its original purpose as a facility for recording music on video – this studio was also home to several pilots and broadcast series.  These were of the discussion programme type including both series of Morgan and Platell or entertainment shows such as That’ll Test ‘Em for More4 or Guinness World of Records for Challenge TV.  In February 2014 Channel 5’s debate show The Big Benefits Row Live came from this studio.

The Hospital Club studio picked up more bookings following the closure of TV Centre – notably Watchdog, which transmitted live from here.  It also hosted some work for MTV after their own studios in Camden closed.  The studio was the home of the live daily programme Strictly Come Dancing: It Takes Two between 2004 and 2007 and again in 2018 and 2019.  Vic and Bob’s Big Night Out was recorded here in 2018 and 2019 for BBC4 and the first two series of Joe Lycett’s Got Your Back were made here for Channel 4 in 2019 and 2020.  Other productions included Frankie Boyle’s New World Order and Richard Osman’s House of Games.

In May 2020 there were press reports that h Club were in financial difficulty, due to the Covid-19 restrictions.   Their US branch had closed and the future of this branch was looking uncertain.  In June 2020 there were reports that it had been placed in administration and studio bookings for the summer onwards had been cancelled.  The whole building including the studio then closed and the staff were laid off.  Very sad news indeed.  In September 2021 all the contents of the club were auctioned off – but not those of the TV studio.

In October 2021 it transpired that the building had been acquired by German companies AM Alpha and WE-Holding.  They intend to convert it into Patrizia’s new London HQ – they are a real estate and infrastructure fund management company.  They say it will be turned into ‘creative office space.’  Apparently, Patrizia is not intending to relocate from its current London HQ in Knightsbridge until 2024, to allow time for the building to be redeveloped.    Perhaps of more interest to readers of this website, buried within the press report was this statement:  ‘AM Alpha intends to retain the TV and music recording studio in the lower ground floors.’  I have contacted the company and they have confirmed that the studio equipment has not been disposed of and that the studio will reopen.  However, they said the date ‘depends on various factors.’  Another source has informed me that the opening date will be 2023 at the earliest, after the rebuilding works are complete.