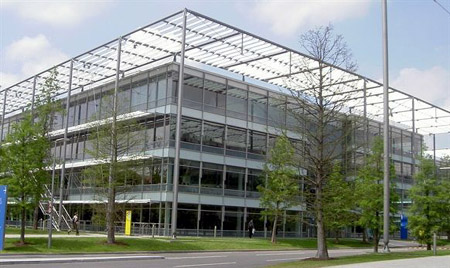 Corinthian TV Facilities were based in St John’s Wood Studios.  The continuity links between programmes on the Disney Channel – which took the form of short, live programmes – came from their studio.  They also provided post production and other facilities for various production companies but not for Disney.

Corinthian were born of CTV Facilities and before that, Carlton TV, Carlton Broadcast Facilities and originally, Transvideo.  They had been in St John’s Wood Studios since 1980 but wanted to expand the services they could offer to the Disney Channel including post production and channel playout.  From its launch in 1995, this had been done firstly at Teddington and then Stephen Street.  Corinthian offered to do everything in this one building – simplifying the whole process and of course winning the contract for all, not just some, of the work.

These studios, although not particularly large, were fully utilised – with one being the base for Studio Disney and the other regularly set and reset for various kids’ gameshows and the like.  These included talent show Star Ticket.  The crews who worked there were certainly kept busy.  In January 2003 GMTV’s Diggit was relaunched as Diggin’ It and shared the same set as Studio Disney.  This ran until January 2005.

In February 2004 Corinthian TV Facilities closed their St John’s Wood studios.  In November of the same year the name Corinthian was dropped and this facility became became Technicolor Network Services, owned by Thomson Multimedia.  (Thomson had purchased Technicolor from Carlton Communications in 2000, at the same time as purchasing Corinthian).

For reasons known only to highly paid TV execs, live presenters on all children’s TV channels went out of fashion around 2005 and Studio Disney and its associated spin-off shows ended on 1st July.  The studios were mothballed – crews made redundant, cameras disposed of and the monitors in the galleries apparently finding their way to various post production suites around the building.

However, in 2008 some occasional programme-making began to return.  The first used an OB unit and hired in lights (the existing studio lights had not been PAT tested) but the later series got one of the galleries up and running again.  The shows were made for the Disney Channel UK – the second one being a gameshow based on the hugely successful Hannah Montana series.  Cameras and some other gear were hired in.

In the summer of 2008 the studio contract with Disney ended so Technicolor began to market them more widely.  Studio 1 immediately picked up a long-term booking as the base for Setanta’s football coverage.  Studio 2 was, I gather, used occasionally by independent companies – including Disney, as it happens – but I understand that the galleries for that studio were not recommissioned.

Setanta, unfortunately, folded in June 2009.  It seems likely that Technicolor decided at that point to close the studios for good.  There is no mention of them on their website and written requests for information have not been replied to.  Of course – if you know different please let me know!

In June 2020 Disney announced that following failed negotiations with Sky and Virgin Media they would be closing the Disney Channel and their two other kids’ channels at the end of September.  Their content is now available only on the Disney+ streaming service.