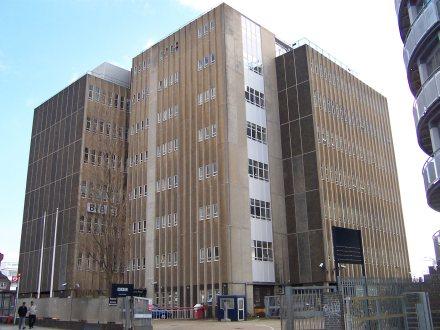 Before moving onto Stage 5 a brief mention ought to be made of the  Television Rehearsal Rooms  in North Acton.  Clearly, not part of TVC but very much tied in with the process of making programmes at the Centre, they were only two stops down the Central Line.

Mike Jones passed to me all sorts of fascinating info about this little area of TV history.  (The picture above is thanks to him).  He used to manage the bookings as part of his job.

When TV Centre was in the early stages of planning it had been assumed that rehearsal rooms would be included.  However, the BBC at the time needed about 30 such rooms – all big enough to compare with the space available in a studio.  They soon realised that there would simply not be sufficient space on site and of course cost was another issue.  Therefore they would continue to book all the old drill halls and church halls currently in use.

Astonishingly, this decision caused a flurry of letters to The Times in Nov/Dec 1962 involving a prominent MP and several others.  These decried the despicable treatment of actors by the BBC.  The head of drama at Granada rubbed the BBC’s noses in it by pointing out that Granada had included rehearsal rooms in its new centre.  (ATV’s new studios in Borehamwood also included rehearsal rooms.)  However, for the first decade of TV Centre’s life, actors and performers would have to slum it – as indeed they do now.

This decision was most unpopular, not only with performers but with directors and producers too.  According to Mike Jones – Bill Cotton Jr, being shown around the Centre for the first time, nonplussed the assembled top brass by agreeing that it was all wonderful but then went on to ask; “Where are we supposed to rehearse?”  Bill was just a Light Entertainment producer at the time but in 1962 was made Assistant Head of Light Entertainment.  In later years he of course became head of Light Entertainment and then Managing Director of Television.  One can’t help thinking that if he had been in charge a few years earlier there would have been some suitable facilities included at the Centre.

However, the BBC were eventually forced into making some new arrangements.  In 1968 the government announced a planned reduction in the size of the Territorial Army and many drill halls around the capital would close or have a change of use.  The BBC would have to provide its own facilities after all.  They drew up plans and did a deal with a property development company who would be responsible for building them.  The Television Rehearsal Rooms in Victoria Road, Acton opened on 4th May 1970 containing eighteen large rooms.

The local press visited soon after opening and reported that the following programmes were in rehearsal:  Dr Finlay’s Casebook, Dad’s Army, The Doctors, a drama series called Codename, Up Pompeii, a Brian Rix farce and an edition of 30-Minute Theatre.

The building was very impressive – seven floors high and with a great view of – well, Acton actually – from the canteen’s terrace on the top floor.  The ground floor was where rehearsal props and hundreds of white poles on bases were stored.  (These were used to denote doorways in sets.)  Each of the first to sixth floors had three very large rehearsal rooms of 70′ x 50′, 70′ x 50′ and 80′ x 50′.  There was also a large green room on each floor.  The first floor rehearsal rooms even had sprung dance floors.

For the first twenty years of its life it was very busy with all kinds of shows being rehearsed – dramas, comedies and variety shows.  The canteen at lunchtime was filled with dozens of famous showbiz stars – actors, singers and dancers all rubbing shoulders and massaging egos.

Of course, in the early 1990s it was considered by the accountants that such facilities ought to make a profit (!?) so a price was put on the hire of each room.  Few programmes could afford to pay the unrealistic hire rate set by – well – I wonder who? – so sitcoms and sketch shows mostly moved out to cheaper church halls.  (Why didn’t they charge productions the same as other accommodation, one wonders – then the licence payers’ money would have stayed within the BBC rather than going to the owners of all the less suitable halls.  You see, I simply don’t understand how to run a business.)

To be fair, by the ’90s the rooms were not needed by anywhere near as many productions as in previous years.  The change from multicamera studio drama to single camera shooting meant that the need for rehearsal rooms for dramas dried up (they were usually rehearsed at the shooting location) and the old variety shows also went out of fashion.

So – by the end of the 1990s, two of the floors were being used as the costume and wig store and the rest was turned into – offices.  Hey ho.  It does seem strange that at least one floor could not have been kept on with its three rooms for rehearsals.  The BBC Comedy department could certainly have kept those in use – and of course they could also have been rented to independent companies too.

In fact, a couple of rooms did become vacant around 2007 when it was clear that the building would soon be disposed of.  The office furniture was cleared away and they became – rehearsal rooms!  They were busy for several months and proved what could have been done for the previous decade with a bit of – dare I say it – imagination and common sense.

PreviousStage 4 (The Spur)
NextStage 5
Previous
Next